Rose Dubois Archivist, Quebec (Canada) . . .
A companion series to the Apocalypse 10 Lives website, this blog follows the fictitious journey of Rose Dubois, a young Quebecois woman who begins her career as an archivist during the early stages of World War One. Each of #RosesDiary entries will connect to a playable character from Apocalypse 10 Lives and introduce readers to one of the “Big Six Historical Thinking Concepts,” which serve as the foundation of recent History curriculum advancements. Made in collaboration with NFB Education

It is clear to me now that this war, this Great War, will not end quickly or quietly. Germany and Austria-Hungary seem intent on provoking the entirety of Europe, and countries are scrambling to assess the situation. It has been just over a month since Czar Nicholas II of Russia personally took over as Commander-in-Chief of the Russian army. Something tells me that this will not bode well for him, as any mistake made by the Russians will be magnified and the blame will fall squarely on his shoulders. I know that Sir Samuel Hughes, our Minister of Militia, has had to respond to oppositional voices on an almost daily basis. Particularly, our armament of choice, the Ross rifle, seems to be underperforming in the field.

But Canada and Russia are not the only countries making difficult decisions for difficult times. Last month, it came over the wires that France has made a declaration of mobilization from the French African colonies. All native inhabitants over the age of 18 are expected to join the fight for France.

It appears General Charles Mangin will be coordinating the French African regiments. Having spent most of the last two decades immersing himself in the West African region, he should have a fair understanding of how to prepare his new troops. Our reporter in French West Africa took a picture of one young man, Ismaël Tangaré who had just enlisted for service. 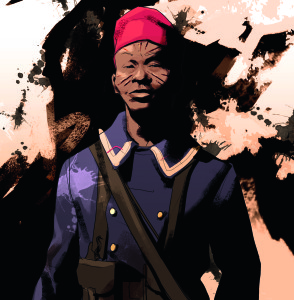 Perhaps proud young men like Ismaël will be able to turn the tide in southern Europe, or perhaps they will simply add to the casualties of war. I hate to be so negative, but I can’t help feeling a connection between the Africans and our situation here in Quebec. Being obliged to fight for a country that does not fully respect our cultural identity, and our own desires…

In fact, writers at our paper have attempted to be particularly vocal critics of government action, even if we do face censorship on a regular basis, even from our own editors. I am concerned that the French public will have an even more difficult time getting access to the true events of the war, as the newspapers of France need to submit proofs to the War Ministry before publication. As well, the amount of propaganda being released by all governments seems to grow with every passing week. In fact, a young French reporter, Albert Londres, is reporting that a new phrase has become popular amongst the French soldiers: “bourrage de crâne,” or “brain-stuffing.” What a perfect way to describe the feeling I get after a day of exposure to the grotesque images and shame-inducing sentiments expressed on the posters plastered around Montreal.

What is happening to me, Diary? I feel that the war is changing me, changing all of us. It’s as if the sun itself cannot shine as brightly anymore.

But again, I recognize the irony of what I have just written. As much as I find fault in our government’s approach to disinformation and propaganda, I can’t help but feel a stir each time I hear “Vive la Canadienne” or “Hearts of Oak” playing on the radio. As much as I feel conflicted, I do recognize an undercurrent of progress. Something about this war is changing our country. Something is happening, as if Canada is waking from a teenage dream, and the adult responsibilities make us more hardened, but also more self-confident. I believe, I must believe, that on the other side of this tragic war lies an opportunity for Canada, and the world.

Until I write again,

How do we accurately acknowledge the conditions that affect historical decisions?

Because of her personal connection to the publishing world, Rose has a unique perspective on the way that information is shared (or not shared) during the war. She tries to see both sides of an argument, even when she has her own opinions on the matter. She recognizes that propaganda is not inherently good or bad, but rather that it is important to consider its purpose.

As students of history, we are often engaged in discussion on events that have been “prejudged” to be good or bad. It is vital that we examine events in the context of the era in which they occurred, rather than applying our own worldviews to pass judgement. Historians must look at history through a “legal” lens. We must interpret the facts for what they are, regardless of our own bias. For example, one of the most obvious opportunities for this sort of practice is evaluating Hitler as a political leader. Our opinion of him as a person must not supersede our inferences based on evidence about his rise to power in the 1930s.

Guidepost 1: Current and past worldviews (beliefs, values) are not necessarily the same.

Guidepost 2: We cannot judge the past based on current ideals.

Guidepost 3: Historical context allows us to understand the perspectives of historical actors.

Guidepost 4: We do not need to agree with historical actors in order to infer their perspectives.

Guidepost 5: Historical actors will have diverse perspectives on the events in which they participate.

All Guideposts to Historical Thinking