Rose Dubois Archivist, Quebec (Canada) . . .
A companion series to the Apocalypse 10 Lives website, this blog follows the fictitious journey of Rose Dubois, a young Quebecois woman who begins her career as an archivist during the early stages of World War One. Each of Rose’s diary entries will connect to a playable character from Apocalypse 10 Lives and introduce readers to one of the “Big Six Historical Thinking Concepts,” which serve as the foundation of recent History curriculum advancements (http://historicalthinking.ca/). Made in collaboration with NFB Education

Grüß dich — Hello, diary. What a difficult few months it has been. I cannot believe that I am writing these words in a news office in Vienna, Austria. War makes strange bedfellows, and so here I sit, in a small room at the back of the Social Democratic Arbeiter-Zeitung (Workers’ Newspaper).

I must be constantly on guard, as the Kriegsüberwachungsamt (War Surveillance Office) occasionally sends officers around to harass the paper, one of the few that is standing up against government-enforced propaganda, something that I abhorred in Canada as well. Freedom of the press, as they say. It is strange to think that I cannot share my experiences here with my former paper in Quebec. Leaving in the middle of the night does not impress an editor focussed on deadlines…

Speaking of the press, diary, I feel it is time to proclaim Dim Seed my guardian angel. He has done nothing but protect and support me as I have made my way across Europe. When I arrived in Europe, Dim had a contact there who was able to supply me with a passport to get into France. From there, I was able to make contact with James Corcoran. The Royal Newfoundland Regiment did, in fact, play a tragic role in what I now believe to be the most hopeless of battles this Great War has seen, the Battle of the Somme. Stationed near Beaumont Hamel, James and the Regiment were prepared to advance, in secret, on a German position. Unfortunately, the Germans were aware of the attack, and James was one of the lucky ones. Barely one man in 10 was able to answer the roll call the next day. For the last five months, the Battle of the Somme continued to take the lives of soldiers on both sides of the war.

From France, I was able to move through Switzerland and into Austria. Dim had met a noblewoman named Elisabeth Von Werdenberg a few years earlier, at the funeral for Franz Ferdinand, and suggested that we attempt to make contact. I must admit, with all the focus on the German powerhouse, Austria has taken a smaller role in the North American narrative. Thanks to my new friends from the paper, I was able to see some footage of the Archduke, in the period before Gavrilo Princip changed the course of history. Even now, the seat of power is in flux, as Charles I has just succeeded his uncle, Emperor Franz Joseph.

The funeral of Emperor Franz Joseph (1916)

They say that Charles has true peace in his heart. We will have to wait and see whether he is able to turn the fortunes of this country towards harmony, or whether it will fall back in lockstep with the rest of the Central Powers.

Elisabeth and I were able to arrange a meeting at a small café, where she told me she would sit and discuss psychology with Sigmund Freud. We certainly discussed psychology as well. It seems we are very much in agreement about our distaste for political maneuvers meant to distract and disengage the public from the truth about the war. Dim had mentioned our mutual love for writing down our thoughts, and Elisabeth brought one of her diaries for us to compare. 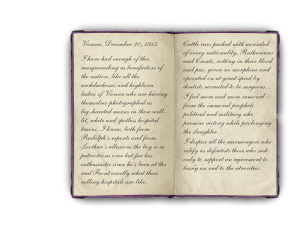 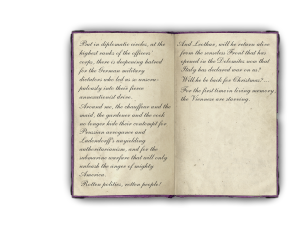 We discussed our shared experience as women, working to have our voices heard. Even as a woman of nobility, Elisabeth did not yet feel a true sense of emancipation. As we discussed my time in Europe, she became more emphatic that she would do whatever she could to support my journey. She has just furnished me with another passport that should allow me into Germany itself. I feel as though I am stepping into the lion’s den. Tomorrow morning, a package will arrive at the newspaper’s office, and I will slip out the back door and on to my next adventure.

Until next time, diary.

How do we read a source for evidence, not for information?

Rose has had the opportunity to get her hands on many primary sources in the last few months. Not only has she read diaries, letters, and watched footage, but she has been able to spend time with a newspaper that was in direct opposition to the government propaganda being produced in Austria. When looking at primary documents, the historian must ask questions before looking for answers. Who, why and how was the document made? As “fake news” becomes a more prevalent concern, it is essential to question sources and look for clues about motive. Once a satisfactory perspective has been achieved, the document can be used as evidence to support interpretations and hypotheses about events of the past. In this way, primary sources become a vital tool for the historian looking to achieve understanding and historical context.

Guidepost 1: History is based on interpretation and inference.

Guidepost 3: “Pre-reading” a source involves asking who created it, and why was it created.

Guidepost 4: Sources must be placed in historical context.

Guidepost 5: Inferences should be corroborated against other sources whenever possible.

All Guideposts to Historical Thinking