Rose Dubois Archivist, Quebec (Canada) . . .
A companion series to the Apocalypse 10 Lives website, this blog follows the fictitious journey of Rose Dubois, a young Quebecois woman who begins her career as an archivist during the early stages of World War One. Each of Rose’s diary entries will connect to a playable character from Apocalypse 10 Lives and introduce readers to one of the “Big Six Historical Thinking Concepts,” which serve as the foundation of recent History curriculum advancements (http://historicalthinking.ca/). Made in collaboration with NFB Education.

Some Canadian pride this week as our men in the skies are beginning to show their strength. There is a rumour that a Canadian fighter pilot named M.M. Bell-Irving has been responsible for downing a German plane in the skies over Europe. I wonder if there are any other young pilots in our military that might make a name for themselves? I certainly hope that to be the case, as reports from the front imply that the German aces are meeting with much success.

Here at home, another young man, Wallace Turnbull, is developing some new forms of propeller that may aid in the air war. If he can develop the technology in time, I am confident that it will be a valuable enterprise.

I cannot believe that we are about to experience our second Christmas at war. As I look back through this diary, I am reminded of how discouraged I was last Christmas. The only thing keeping my spirits high was the chance to put my journalism degree to work. Would I still want that chance now? Every day, new reports come in. Letters and journals from soldiers on the front lines make me grateful that I am only reading, and not experiencing the horrors of the war firsthand. For example, our paper has recently received some pictures from a young French soldier named Émilien Meysenot. 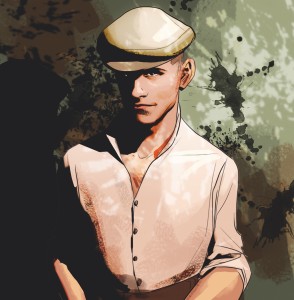 Just over a year ago, he was a simple farmer in Southeast France, and now he is responsible for digging tunnels under the enemy stations as well as placing the dynamite he hopes will break their positions.

But I am not the only one looking both back and forward. In our sister province of Manitoba, there is an exciting development. Early in the new year, we will know the results of a campaign that has been building to give women the right to vote.

Diary, I know this might sound sacrilegious, but I may be in love with another woman. Her name is Nellie McClung, and she is a champion for women’s rights. She has just recently moved from Manitoba to Alberta to continue the battle. She reminds me, every day, that I am a person. I am a human being with rights, opinions and thoughtful beliefs. Perhaps this war will remind the world just how valuable our 50 percent of the population are to the daily successes of our society.

Diary, as this year comes to a close I have begun to think about the next one. How can I best contribute to the war? I am still thrilled to participate in the fourth estate, reporting about the actions of our leaders and presenting the facts to our readers. It is the vital duty of journalists to emphasize fact over fiction and evidence over rhetoric. But I wonder… I have read articles by Dim Seed, the American journalist I’ve mentioned before, who is travelling throughout Europe and actually investigating, not just reporting. Perhaps it is the call to adventure that draws me. Perhaps it is something else. All I know is that there may come a time when this life will not be enough for me. I am returning to Shawinigan to spend the holidays with my family. I will see you in the new year. Let us pray for a bright future.

How can we make sense of the complex streams of history?

In this diary entry, Rose reflects on what her life was like just one year earlier. She uses this past experience as a point of comparison in order to understand and evaluate her current state. Fundamentally, she is looking for similarities and differences. What she also realizes is that time does not end. Real life does not tie itself up in a perfect 22-minute sitcom bow. The woman’s suffrage movement started long before she was born, and would continue long after she is gone.

Similarly, when studying history, we must not think simply in terms of single, linear timelines, but rather of multiple, overlapping periods. Focusing on the way that important events reflect both continuity and change creates a stronger sense of context. Whether the subject is soldiers in the trenches, women working in factories, or government propaganda techniques, each one came from something and led to something else. Our society is shaped by the ideals that we hold on to and the ideals that we adapt, especially when those ideals conflict with each other. It is the responsibility of the historian to emphasize these tensions.