Rose Dubois Archivist, Quebec (Canada) . . .
A companion series to the Apocalypse 10 Lives website, this blog follows the fictitious journey of Rose Dubois, a young Quebecois woman who begins her career as an archivist during the early stages of World War One. Each of Rose’s diary entries will connect to a playable character from Apocalypse 10 Lives and introduce readers to one of the “Big Six Historical Thinking Concepts,” which serve as the foundation of recent History curriculum advancements (http://historicalthinking.ca/). Made in collaboration with NFB Education

There is news today that the United States has finally decided to enter the war. Although its troops may not be on the ground for weeks or months, many believe that this will be a turning point in the conflict.

I feel, at times, as if we are hoping against hope that some moment, some unique circumstance, will change the course of the war for the better. There have been unexpected developments as well as great personal losses in the world at large over the last few months, and it can sometimes be difficult to make sense of it all. Revisiting those key moments now, I might finally be gaining some perspective, but just recalling them makes me feel dizzy as I think about where I am headed next.

Where should I begin? I believe I must start with dear Elisabeth. After all of her kindness and understanding towards me, she received the most terrible news after our return from Germany in January: her son had been killed in battle. 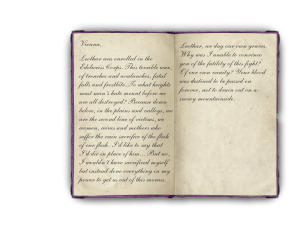 That was the moment that I truly understood the tragedy of war. Although an “enemy” soldier had been killed, I felt nothing but utter and complete sorrow. No propaganda in the world could make me cheer that loss. It was human life, gone in an instant, and it was heartbreaking. It was then that she began to make preparations to head to Switzerland. She was able to secure me passage, but we would not be able to travel together. In late February, I said goodbye, hoping that we would see each other again, but fearing we might not.

After arriving in Geneva, life became, dare I say, easy. Because of Switzerland’s immunity, the city was a hotbed for journalists camped out with the Red Cross and other aid organizations. I must admit, it was my first time speaking to a journalist from France face-to-face, and the sense of joy I felt using my native tongue was indescribable. One of the journalists here has spent the last few months travelling with the Russian troops along the Eastern Front. He told me a story about a soldier named Vassili Godovkin, who spent almost three years in a prisoner-of-war camp in East Prussia .

Prisoners of War in East Prussia

When he was finally able to escape, he returned to a Russia that was in disarray. Thanks to my Russian contact, I was able to get news about the abdication of Tsar Nicholas II, and what is now known as “The Bolshevik Revolution.” 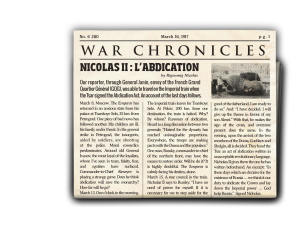 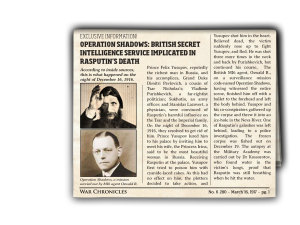 It was almost too difficult to believe that in the middle of such a violent war, Russia was in the midst of a civil war of its own…

At the end of March, a beautiful miracle! Elisabeth and I are able to make contact in Geneva. Although she is only staying for a few days, we are able to meet briefly in a small cafe. She is heading to Russia to meet with Vassili Godovkin, as there are rumours that Vladimir Ilich Ulianov, better known as Lenin, is travelling to Petrograd to speak to the people there.

I won’t be travelling with Elisabeth this time. Instead, I am going to make my way to Northern France where many of the most fearsome battles on the Western Front are taking place. Many valiant Canadians lost their lives near there in the battles of the Somme, in France and Ypres and Passchendaele, in Belgium, and I must believe that Victoria Crosses will be handed out to a number of our troops when all is said and done.

I have heard that there is a small group of journalists leaving tonight for the area around Vimy, where the entrenched Germans are giving our troops some trouble. In my chest, I can feel the beating of a proud Canadian heart. Hopefully I will be able to bear witness to even a small victory in this seemingly endless war. Regardless, I want to be there for whatever happens, because it is my duty, our duty, Diary, to record and memorialize the true Canadian experience. Without us, who will remember this in 100 years?

How can we make sense of the complex flows of history?

Little does Rose know that she is about to witness “the birth of Canada” at Vimy Ridge. As a historian, Rose would recognize the important victory, but she would not be able to comprehend its true significance until much later. It is a moment in Canadian history that signals a paradigm shift, but one can never consider an event outside of its historical context. Canadian history existed before and after that battle on the ridge; students should always remember the timeline that stretches out on either side of a moment in history. It was the Canadian success at Ypres and the Somme that allowed the Vimy battle to happen, and Canadians continued to fight until late into 1918. By placing events in relation to one another, patterns and consistencies appear that help us to understand the whole as well as the individual parts more completely.

Guidepost 1: Continuity and change exist together, not separately.

Guidepost 3: Change can be both positive and negative, with the same event affecting people differently.

Guidepost 4: Periodization, the process of dividing history into sections, helps to organize our understanding of continuity and change.

“I love the surprises found in a new batch of CAMPUS films. The range of viewpoints and voices offered by the NFB’s productions is almost unparalleled. In the classroom, I want my students to focus on critical thinking and empathy, two essential life skills. I am an OCT-certified teacher and have developed curriculum for a number of CAMPUS films, including the No Fish Where to Go study guide addressing the question of refugees”.